What are Wicking Beds?

When we first started Very Edible Gardens (VEG) back in early 2009, we had no idea what a wicking bed was. Then, after a year or so of installing raised vegetable garden beds all over Melbourne, someone whispered the words into our ears. “Wicking beds,” they said. “We want some wicking beds.”

“Wicking beds” we thought, smiling and nodding, then scratching our heads. “What on earth is a wicking bed?” So we did some research and, equal parts intrigued and sceptical, we started to experiment. Up till then all our raised veggie beds had been either unirrigated or set up with drip irrigation. But now we started setting up wicking beds in old bathtubs:

…and then, using plastic liner, in our standard raised VEG beds which are assembled from sleepers of locally harvested Cupressus macrocarpa timber:

What is a Wicking Bed?

So what is a wicking bed? Invented by an Australian named Colin Austin, the idea is that you prevent water from leaving the bottom of the bed with a waterproof liner or layer. This creates a reservoir of water beneath the soil. Then, rather than you then having to irrigate by watering from above (via drip irrigation, a hose, watering can etc), the water literally wicks up into the soil from below, keeping it nice and moist. You prevent the weight of the soil from squashing all the water out and making a muddy mess by having the water sit in amongst a layer of small stones, sand, or similar, which is able to accommodate the water whilst bearing the weight of the soil (and your prize pumpkins etc) without collapsing. You prevent the soil from dropping down into gaps between the stones or sand particles with a sheet or layer of something that lets water wick up but stops soil moving down. The last essential piece of the wicking bed puzzle is that you need a designated overflow point so that the soil layer doesn’t get flooded and kill the soil life and plants by rotting their roots.

As you’ll know if you’ve researched wicking beds online, the available information is scattered about the web in dribs and drabs and often with advice that contradicts what the other site said. So, taking it all with a grain of salt, we set out to learn by doing, our initial intention to prove to ourselves that wicking beds didn’t work. We gave it a pretty good shot, and in the process we learned a lot and refined how we go about them enormously.

But here’s the thing. When set up properly, which means following a few simple rules (all to be revealed below), they work an absolute treat! Take an example. When installing nine large raised beds in Rosanna some years back, as part of the design pictured below (click for larger version), our clients Ken & Jenny went in for making one of the nine beds a wicking bed.

About a year later they called us back to not only convert the eight non-wicking beds to wicking, but to build another five new wicking beds (see article about that conversion here). They said the difference in water efficiency was incomparable. The same thing has happened more recently in Thornbury, where Rosalie had us convert a couple of beds to wicking then, after comparing their performance with her original non-wicking beds, called us back to convert them too. Just recently Rosalie shared that “…just got my water bill for summer. Half the normal amount of water used – thanks to those wicking beds I think. :).”

So what is the big deal? Why did these folk find wicking beds so favourable compared with non-wicking beds? The way we see it, here are the main advantages of well-built wicking beds in Melbourne’s climate.

First, because the water held in the reservoir can only leave the bed by wicking up through the soil profile to be sucked up and incorporated or transpired out by the plants, wicking beds are crazy efficient when it comes to water. Particularly with raised beds, most of the irrigation water you apply usually drains straight out the bottom and is lost to your precious vegetables forever. This is not possible in a wicking bed. Every drop is forced to stick around, at least until the reservoir is full, at which point the surplus exists via a designated overflow point (more on this later).

Second, many irrigation systems, in applying water to the top of the bed, mean that much of the water is lost into the atmosphere as evaporation, before it even has a chance to drain through and be lost by leaching out the bottom. The water storage and application solution embodied in a wicking bed pretty much eliminates evaporative water loss, for the water is all down below the soil, nice and cool, safely tucked away from the suns drying rays. Furthermore, if set up just right, the zone of moist soil starts about 5-10cm down into the soil, meaning the plant roots can easily reach it, but the sun’s rays cannot.

But wait, there is more. Third, wicking beds not only hold onto water more effectively, and in a way where that water automatically and passively makes its way to the point of use (the root zone of your plants), but they maintain a more constant desirable soil moisture profile than other irrigation approaches we are aware of. That’s right, in a wicking bed, so long as the reservoir is kept topped up, the soil around your plant roots is always just right. Not too wet. Not too dry. Just right. Goldilocks would love wicking beds! What this means is that excess or deficiency of soil moisture is almost never a factor limiting compromising optimal growth of your vegetables. That’s the theory, anyway, which is so far consistent with our experience.

Compare this to a standard drip irrigation system on a conventional raised bed (All of this applies to non-raised beds, by the way, but though in-ground wicking-beds work fine, we won’t discuss them here given we’ve less experience with them.). Not only are you constantly trying to adjust the timing and duration of irrigation according to the season, you are also creating a pulsing pattern in the soil moisture levels over time. Right when and after you turn on the system and irrigate, the soil moisture levels might be about right, or possibly, if it is a heavy soil, a little excessive. But then, once you turn the system off, and most of the water drains out the bottom, within a few hours during the hot season the soil around your plant roots are now too dry again! So the plants are perhaps most of the time having their optimal growth limited or constrained by the excess or deficit of idea soil moisture levels. Not ideal.

For all these reasons, the wicking beds we install contribute to happier customers growing more vegetables for less effort. As a result, these days we install more wicking beds than not. We have to admit that despite our initial scepticism, they have proven themselves, and we have now installed many hundreds of the things.

This is not to say we think wicking beds are a panacea. There are still times when we think non-wicking beds, whether in the ground or raised, are more appropriate. Following an appropriate design process is all that will unveil the most appropriate vegetable production technique for a given site and set of users, so all we are saying is that we now keep wicking beds in our toolbox as an option where appropriate. Beware the cookie-cutter approach! 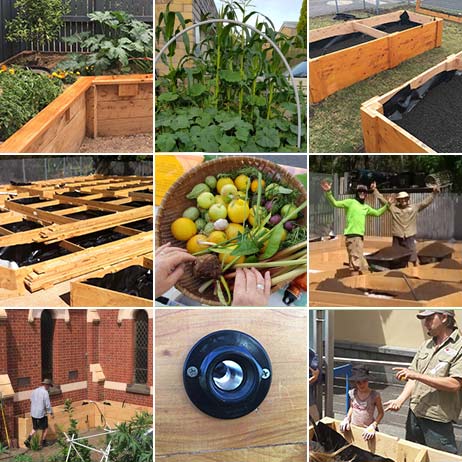 Babacos and Bananas. I lost count at somewhere nea

"waiting for lunch" When looking for plant inspira

Last week the VEG team got together on the incredi

We are loving the spring burst of backyard biodive

Check out those bananas! Growing and thriving in M